Ever had frog? Okay, hold back the "ick". Frog is pretty tasty, and in truth, really just kinda tastes like chicken. Whether you're a veteran frog eater, or an adventurous newbie, check out this recipe for stir-fried frogs, via Serious Eats.

BUT, FIRST, a chilling tale on HowTo bring the cadavers back to life:

"I shimmied the cadavers onto a plate lined with paper towels to siphon away what remained of the blood. The frogs lay there with their little hands and feet up in the air, very pale and very still. My plan was to keep them in the refrigerator overnight and cook them the next morning - as such, I began to sprinkle the bodies with a bit of salt. Upon contact with the salt, the appendages began to move. I recoiled in shock. Was it normal, that even after the frogs had been stunned, skinned, and eviscerated, for their appendages to be quivering? 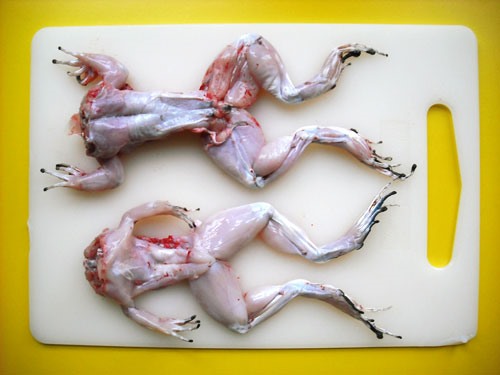 After 20 seconds or so the quivering turned into a restless jig. The legs twitched violently, pumping up and down as if they were getting ready for one last hop. Then the forelegs began to pump too, with their spindly fingers grasping upwards towards me. The chests, which had been exhumed of their innards, heaved up and down as if gasping for air.

Instead, the muscle spasms continued ceaselessly, growing ever more urgent as the minutes went by.

I waited for the twitching to subside. Instead, the muscle spasms continued ceaselessly, growing ever more urgent as the minutes went by. I began to worry. Were frogs, like cattle, most succulent and juicy when kept calm before the slaughter? No one was around to point out the obvious, that the frogs had already been butchered, that these convulsions were occurring in the post-mortem period. Like Baron Frankenstein to his monster, I gently laid a sheet of plastic wrap over the jiggering frogs and returned them to the refrigerator, where the chill would presumably deter further movement. 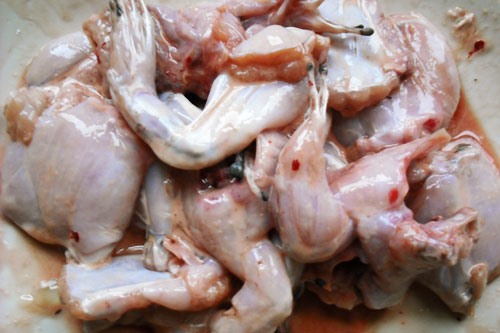 The next morning I awoke and walked straightaway to the refrigerator for a peek. There the frogs lay, perfectly motionless. As I sipped my morning coffee, I watched and felt assured that my amphibians had finally kicked the bucket."

Creepy. And here it is live:

Why does this happen? Serious Eats gives a vague answer. Anybody else? Please, comment below.

Some sort of chemical reaction between the salt and something on the frog legs, sending impulses through the bare nerves? My best guess.

frog legs taste like a cross between chicken and fish.

When an impulse from the brain gets to a nerve a chemical exchange is triggered. K+(potassium cation) is diffused out while Na+(sodium cation) is diffused into the nerve cell.
Salt is NaCl(sodium chloride).. Na being positive and Cl being negative.. so it "sends" an impulse to the nerves.
The weird thing is that the transmission between nerves also requires calcium.. but I guess it uses some calcium it still has in the body.

When I read your comment it triggered my memory about potassium and sodium :B
I had to check that in book first.

ewwwww!! i got no idea why it happends but its just wrong and eww!

That's it I'm getting my shotgun!